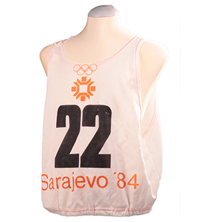 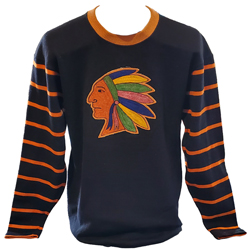 This jersey was worn by Bill Isaacs during his career with the Rochester Iroquois during the 1930s and 1940s. He played lacrosse at a time in Canada when Indigenous Peoples had few opportunities to participate in mainstream sporting events due to inherent racism in sports. Currently, many sports teams are changing their teams’ logos and names to not project continued misrepresentation and mockery of Indigenous Peoples. For example, the “Edmonton Eskimos” football team changed their name to the “Edmonton Elks” in 2020.
Courtesy of the Brantford and Area Sports Hall of Recognition.

Three generations of Harry Manson’s family attended his induction into Canada’s Sports Hall of Fame in 2015. This is Elder Gary Manson, Harry Manson’s grandson, who inherited his grandfather’s Indigenous name. Elder Manson’s hat is made from cedar bark harvested in Snuneymuxw First Nation, where Knowledge Keepers use it to make ceremonial regalia, baskets, clothing, and medicine. Courtesy of Canada’s Sports Hall of Fame. 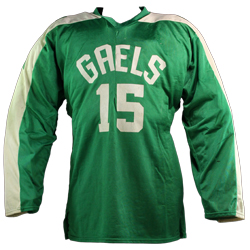 The Oshawa Green Gaels are the only national junior team to ever win the Minto Cup four years in a row, with Gaylord Powless named the team’s Most Valuable Player in 1964 and 1967.
Courtesy of the Gaylord Powless family.

Bill Isaacs played with the Rochester Iroquois in the mid-1930s, where he refined his skills before returning to Canada.
Courtesy of the Brantford and Area Sports Hall of Recognition.

The last jersey Bryan Trottier wore as a New York Islander player; he scored his 500th goal in 1990 while wearing this jersey.
Courtesy of Bryan Trottier. 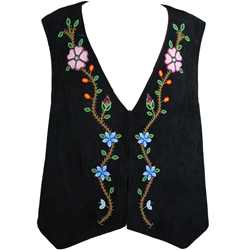 James Lavallée’s vest was custom-made by Michela Carrière, a Cree/Métis artist who creates traditional glass beadwork on deerhide clothing and jewellery. Beaded artwork has been made by First Nations peoples for thousands of years, with different groups passing down their own unique styles.
Courtesy of James Lavallée.