In Canada, in the sport of water polo, one name stands above the rest, Waneek Horn-Miller. She is a strong and proud Bear Clan woman from the Mohawk Nation of Kahnawake close to Montreal. Mohawk people have a rich vibrant culture and history based on honour, trust, peace, respect, and leadership.

Waneek was raised with her three sisters in a single-parent home by their mother, Kahn-Tineta Horn. As a young girl she remembers that at times there was no heat in the house or much food on the table but what they lacked materially, was compensated for with love and support to pursue their dreams. Waneek remembers as a child, having a dream to someday participate in the Olympic Games. Waneek’s mom moved the girls to Ottawa to access better opportunities, where they shared a small room with a pullout couch that they all would sleep on, across from the YMCA. Scraping together what little money she had, she purchased a membership for the girls at the YMCA, giving Waneek a chance to get involved in sports more seriously. Waneek’s mom often reinforced to the girls that opportunities do not come along too often in life, but you must seize them and maximize your efforts when they do. 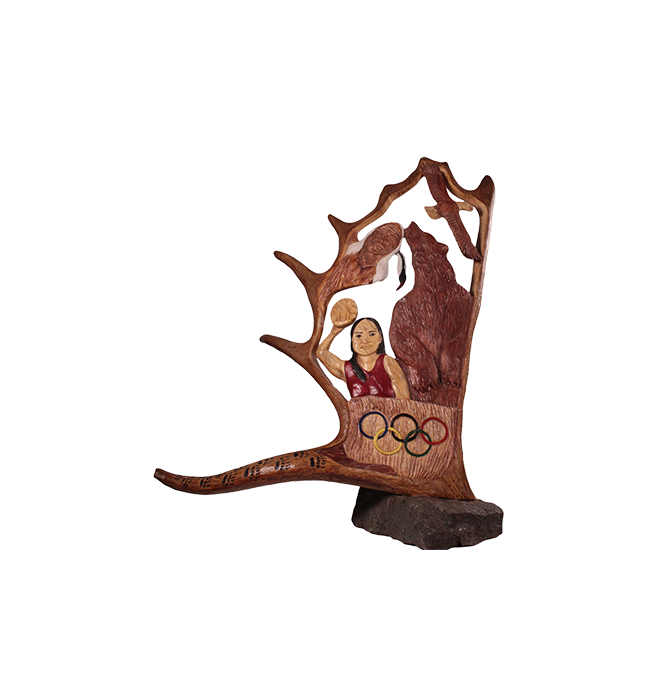 In these early sporting years, Waneek noticed how rarely she saw other Indigenous Peoples participating. Wherever she went, she encountered systemic racial remarks. Though she was incredibly young, she remembers, “It was an awfully hard and discouraging message to hear as a ten-year-old.” When Waneek asked her mother, “Is this true what they say?” Her mother would always respond, “You get in that pool and show them,” which she did by winning three consecutive Ontario provincial swimming championships starting at age 11.

At age 14, Waneek experienced something much more challenging than just being a teenager, or training at the pool, where life would place her on the front lines of history in a conflict known as the Oka Crisis.

Close to the town of Oka, Quebec, Mohawk Warriors set up a barrier to block the expansion of a golf course that planned to build on unceded burial land sacred to the Mohawk community. This conflict continued for 78 days and received international attention. When violence broke out between Canadian soldiers and Mohawk Warriors on the last day of the standoff, Waneek, while carrying her younger sister, was stabbed near her heart by a soldier’s bayonet. Suffering a near-fatal wound, the traumatic experience forced Waneek to the sidelines where she considered quitting sports for good. Through her mother’s support and encouragement, a year after she was injured during the Oka Crisis, Waneek joined both Indigenous and non-Indigenous runners from around the world on the 1991 Sacred Run Canada, which started in Victoria, British Columbia, and ended in Kahnawake, Quebec. In Sacred Runs, runners relay between different Indigenous communities and nations to revive a sense of strength and unity. In 1992, Waneek participated in the Sacred Run North America, which began in Fairbanks, Alaska, and ended in Santa Fe, New Mexico.

Olympian sprint kayaker Alwyn Morris encouraged Waneek to return to water polo training. Waneek made the All-Star Canadian Water Polo teams for both Junior and Senior women from 1991-1999. In the way of her Mohawk ancestors, she successfully transformed what had been a frightening, tragic, racially polarizing event in not only her life but our country’s history into something so much better.

Ten years later, almost to the day, Waneek walked into the 2000 Olympic Games in Sydney, Australia as co-captain of the Canadian Women’s Water Polo Team where the sport made its Olympic debut. She became the first Mohawk woman in Canadian history to compete at the Olympic Games. Not only was she victorious in achieving her childhood dream; she seized the opportunity to honour her Mohawk ancestors by showcasing to the world how strong, tough, and capable Indigenous women are. Her resilience and response to crises and challenges inspire us to look for the positive, even in the most challenging of circumstances, and create the best versions of ourselves.