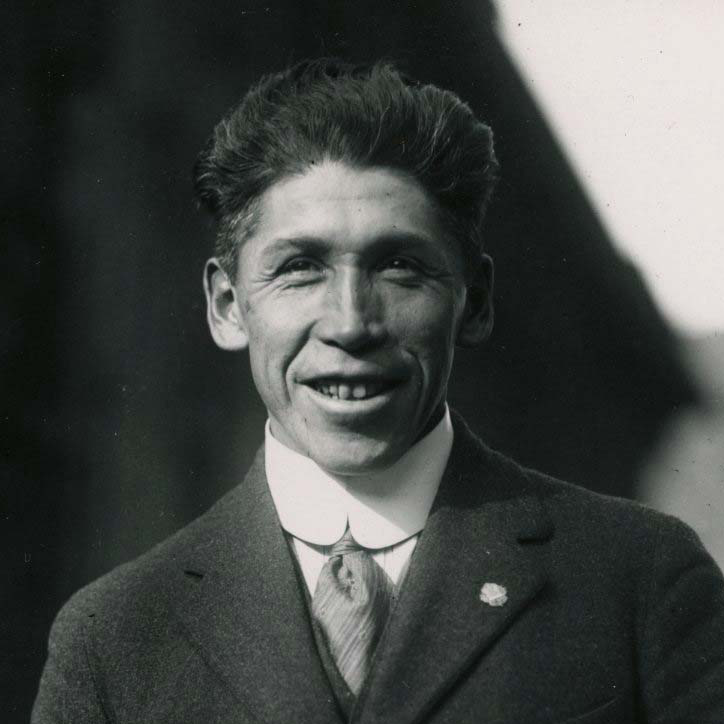 Very few athletes create a legacy that touches the hearts of multiple generations; Tom Longboat is such an athlete.

As a young boy, he was forced to attend the Mohawk Institute Residential School, where no aspects of his Onondaga culture and upbringing were allowed. He ran away from the Residential School and hid at his uncle’s farmhouse, where he helped his family with farm work. This hard work helped build his strength and endurance. During this time on the farm, a Mohawk runner named Bill Davis who had placed second in the 1901 Boston Marathon, noticed Tom’s tremendous athletic ability. Bill Davis encouraged Tom to participate in his first race in 1905. Although Tom did not win this race, placing second, the experience left him hungry to improve. Canvas track shoes worn by Canadian dispatch runners in the First World War. Runners like Private Tom Longboat, who enlisted in 1916, were vital to military planning and organization in the years before technology became widespread.
Courtesy of the Manitoba World War One Museum

This describes the setting for Tom Longboat’s second race, the 1906 Hamilton Herald Race Around the Bay Road Race, which followed a 31-kilometre course. This was a premier international event, hosting competitors from as far away as Britain. When Tom registered for the race, no one had ever heard of him. He appeared shy and unsure of himself. Instead of wearing a custom tracksuit, he wore a tattered pair of bathing trunks with cheap, worn-out sneakers. His hair looked like it had been crudely cut, uneven with an axe. The crowds laughed and uttered racial remarks towards him as they felt he clearly did not belong. When the race started that day, the Tom Longboat legend began.

Racing experts favoured an English runner by the name of John Marsh to win, but Tom locked himself onto the heels of Marsh for the first 24 kilometres. Visibly annoyed by this, Marsh sprinted to break away and create distance, but Tom stayed with him. Crowds watching from the roadside laughed at his peculiar running style. But there was no laughing that day when Tom made his move. Marsh could only gasp in utter despair as Tom sped by him, disappearing as he headed for the finish line in downtown Hamilton. Tom Longboat won the oldest long-distance race in North America that day by almost four minutes. Ten days later he would beat over 60 runners to win the Ward Marathon in Toronto, again in record time.

In 1907, Tom set his sights on what is still the premiere running event in the world today, the Boston Marathon. The Boston Marathon in 1907 was 24.8 miles which was later lengthened to 26 miles in 1924. Despite horrible weather conditions due to traces of sleet and running against 124 of the world’s best distance runners, Tom shattered the course record by over five minutes in front of a crowd of over 100,000 spectators. In 1908, Tom Longboat competed at the London Olympic Games after setting many national records. In 1909, he earned the title, “Professional Champion of the World,” after winning the World Professional Marathon Championships in New York City held at Madison Square Gardens.

He took the oath of service in 1916 to serve his country during the First World War as a dispatch courier with the 107th Battalion, Canadian Expeditionary Force. He was wounded twice but returned home after the end of war. He worked for the City of Toronto in the sanitation department, while raising his family. After retiring, he moved back to the Six Nations of the Grand River First Nations Reserve where he died in 1949.

Tom Longboat’s impact on sport and his community carries on. His legacy is an inspiration to aspire towards success.